Believe it or not, consumers should soon be able to reserve their next trip on Amazon with its new Amazon Travel initiative. In an exclusive piece shared on Skift, a specialized travel industry website, we learn that starting next January 1, Amazon will now offer hotel rooms on its hugely popular site, with selected accommodations in the Seattle, Los Angeles and New York areas at first. The few selected hotels will be properties rated four stars or more on TripAdvisor.

[blocktext align=”center”]”Properties would load their room types, availability, pricing information, and photos into an Amazon extranet and would pay a standard 15% commission to Amazon for the prepaid bookings”, hoteliers at independent properties said to Skift.[/blocktext]

Based on this preliminary information, this would resemble the merchant model used by Expedia, while Booking.com usually get commissions from hoteliers after the guest departure from a property. With commission levels ranging between 15-25%, sometimes as high as 30%, Amazon would thus be at the lower end of this range, making it appealing for hoteliers. At least in the beginning.

This is the kind of news that has the potential of a nuclear bomb exploding in an already boiling hotel distribution landscape. For the past years, there has been a real tug-of-war between hotel managers and increasingly popular online travel agencies such as Expedia (and its subsidiaries like Hotels.com, Hotwire or Trivago), Priceline (and its subsidiaries Booking.com or Kayak), Orbitz or Travelocity. These OTAs dominate the distribution landscape, with savvy marketing, mass-media campaigns but also controversial contracts imposing high commission levels, rate parity, rate integrity and sometimes unauthorized use of hotel property names in online campaigns, i.e. Google AdWords.

But consider this: Amazon has a market capitalization of $157 billion, which is more than twice that of Expedia Group, Priceline Group, TripAdvisor, Travelocity and Orbitz… combined!! In other words, it has the clout to invest massively, if it so does chooses.

Knowing how Amazon has disrupted traditional industries with its nimble e-commerce practices, in particular books, CD, DVD, jewelry or home appliances in general, it will be interesting to see how this new player will carve its niche in hotel distribution where disruption was already happening with newcomers such as AirBnB, HomeAway, part of the sharing economy including other disruptors like Uber, Lyft and many more.

Disruption is also happening with traditional players such as TripAdvisor moving away from its review site core, now offering meta-search capabilities with various OTAs but also providing direct booking channels for independent hoteliers and restaurateurs around the world. And with its acquisition of Viator, a leader in the tours and activities sphere, it will soon truly provide a one-stop-shop solution for every kind of experiences at a travel destination.

Will Google make its move?

This recent announcement also begs the question: will Google finally jump in and become a pure player as well? Ever since it acquired ITA software back in 2011, many industry pundits were predicting a move on this front. Indeed, Google has launched services such as Flight Search or Hotel Finder, serving needs in the travel & hospitality vertical. And we are also seeing initiatives where hotels can promote special offers on Hotel Finder, for example. But will Google take the plunge and launch a Google Travel initiative similar to Amazon Travel, with hotels, flights and eventually other key components from the travel experience?

There are those who believe Google would not want to piss off important clients, which is a valid argument knowing Priceline is said to be its second most important client globally, with $1.8 billion spent on Google campaigns in 2013 alone (Expedia is not too far away, with an estimated $1 billion spent with Google in 2013 as well). But considering the evolving online landscape, Google is no longer the king of the palace, in particular as search and reservations are going mobile. Facebook and social networks are taking a bigger part of the pie, in particular with video viewing, while OTAs are getting more and more people to download their tablet or smartphone apps, increasing direct customer retention and loyalty.

But will it work?

At the end of the day, that is really the most important question: Will customers flock to Amazon to reserve their next trip? At first, it may just be hotels, but we can expect more components to come along, such as flights and ground transportation, restaurants and perhaps tours and activities too. But will travelers have the reflex to search accommodation and book through Amazon?

While doubtful for now, I believe Amazon can certainly shift things around swiftly if it truly puts some skin in the game. With its resources and worldwide distribution, it could quickly become a force to be reckoned with. Perhaps this is why Priceline and TripAdvisor have been so active in the past six months, acquiring firms or launching new services.

For hoteliers, this announcement will certainly be followed closely as Amazon Travel rolls out across more cities in the United States then outside the country. It will certainly mark the dawn of a new era, but then again, hoteliers already know there is only one thing you can always count on with online distribution: change. 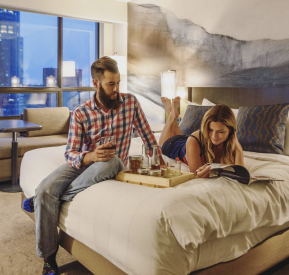 Influencer marketing has become a key tactic that ought to be integrated within online marketing strategies for hotels and travel brands. 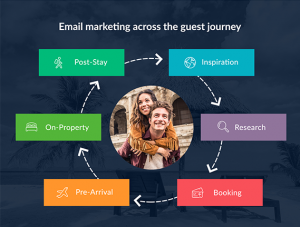 The Importance of Email in Hotel Marketing [INFOGRAPHIC]

Understanding the 5 stages of email marketing across the customer journey helps to identify timely contents and offers. Here are useful tips and examples. 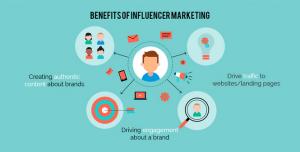 Should you work with YouTubers, Instagramers or other influencers to promote your property? Here are a few pointers that can help understanding the process.