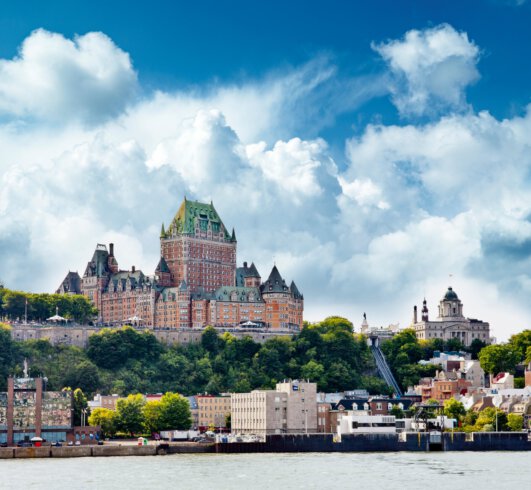 July is a great month in so many ways, the first one being that we, as Canadians, start it off by celebrating our National Day since the country was officially founded on July 1st, 1867. It’s also summertime, which means we get to enjoy some of the heat our Southern friends take for granted on a year-round basis!

In the tourism industry, this time of year is also the busiest and most important, yet just like our Alberta friends have been struggling with floods over the past week, it seems the Canadian tourism industry as a whole is suffering from a long-term downward spiral.

This topic has been a matter of discussion for some time within the industry, but it’s now gaining more public traction, thanks in part to a recent report by the Canadian Chamber of Commerce, called Restoring Canadian Tourism.

Before anything else, did you know Canada was once part of the world’s top 10 most visited countries? Back in 2002, Canada held the 7th position in this highly coveted ranking, but it’s been a slow but gradual downfall ever since, closing in 16th position a decade later.

What’s even more alarming is the fact that Canada has seen its tourism arrivals decrease by 18% while the worldwide trend was a 4% increase. In fact, only Poland did worse during that same decade with a 22% decrease!

Now, one of the biggest problems with the tourism & hospitality industry is that is doesn’t get taken seriously. It’s often depicted as only part-time jobs, seasonal work for students or perhaps a bunch of happy folks working in ski, golf and other such wonderful resorts, right? Wrong.

Did you know that:

The fact that most of the tourism sector is made up of SMEs partly explains why the industry has such a hard time making its point across with decision-makers in Ottawa.

Despite what seemed like a light of hope back in 2011, with Canada’s Federal Tourism Strategy, actions taken by the actual government in place have been mostly detrimental to the expansion of the tourism sector.

While there are various reasons behind this slow death, let’s focus on two very important ones that tend to go under the public radar.

First and foremost, Canadian airports’ outrageous fees. Up until recently, did you know Toronto’s Pearson international airport was among the most expensive ones in the world to land a commercial airplane? More so than landing at Paris Charles-de-Gaulle, London Heathrow or Chicago’s O’Hare, in fact.

Well, Quebec City recently spiked its own fares in order to belong with this select club, even though it doesn’t have anything remotely close in terms of air traffic or amenities. In both cases, guess where (or to whom) these excessive costs get passed on…

In a report issued two years ago by Deloitte, 26% of survey respondents stated they had crossed the U.S. border to save money on a flight by flying out of a U.S. airport. Not only did they save an average of close to $300, but how much of this money is escaping Canadian transporters, suppliers and potential taxation revenues?

Another report once claimed that an estimated 15% of all Canadians were potentially using US airports rather than Canadian ones, for these very same reasons. With the US dollar now at parity with the CAN dollar, and airfares still not competitive in this country, this trend is not about to be bucked.

The second big problem is linked to visa requirements, particularly in emerging markets such as Brazil and China, presently leading the tourism growth worldwide. The problem itself is not to ask for visas, per se. Obviously, it would be better to do without, but one can understand a country to have some policies in place for a variety of reasons.

The problems lies in not having standards, or respecting standards for issuing such visas. Below is an explicit example of situations that keep occurring all too often:

“(…) According to the Embassy’s own information, the average time for a visitor’s visa to be processed in Mexico is about 11 days. Last February 21st, we submitted an application for visitors’ visas for a family of four who have been long time clients of ours. In fact, this family has vacationed in Canada before. All the documentation was in order when we submitted it, and if anything at all was missing we have never been informed. Our clients were scheduled to travel on March 24, Easter vacation. To this day we have not received a positive or negative response from the Embassy. It’s been over a month (or 21 business days). As business people, you can understand how frustrating this is. We are not demanding that the visa officials approve all our customers’ requests for visas. All we would ask is to get a response in a timely manner. Obviously, this family lost their trip to Canada and are still frustrated by the fact that they haven’t received a response from the Canadian Embassy. We all want repeat business for Canadian destinations, but it is very unlikely that this family (and any of their friends who listen to their story) will want to vacation in Canada anytime soon. We tried contacting officials at the Canadian Embassy regarding this issue, but all that achieved was more frustration and disappointment. I am sure you would get frustrated too. The only response we get is that there’s nothing they can do and to just keep waiting. In the meantime, we have to apologize profusely to the clients and persuade them to purchase their travel with us. To another destination!”

(NOTE: this travel agent is an avid fan of Canada and ex-Canadian Tourism Commission employee in Mexico. This conversation was posted on a Linkedin group discussing recurrent problems with international visas to Canada)

If that wasn’t enough, I came across anecdotal evidence just last week while vacationing in Mexico. Discussing with a couple of wealthy Mexicans, they asked where I was from. “Ahhh, Quebec City, we’ve seen pictures and it seems like such a beautiful city. We’ve been to Vancouver to Whistler many years ago”, they said. “So why don’t you come to Montreal and Quebec City, this time around?” I asked. Guess why not? That’s right, the visa process.

Just to reiterate: they weren’t against the idea of requiring visas, but they were aware of the complex process and unusual questions being asked, so they just prefer to vacation in the States. Many times per year. With lots of friends and family, spending in the local economy…

The last bone of contention we keep hearing is that the Canadian Tourism Commission (CTC), which promotes the country on the international level, keeps getting its travel marketing budgets reduced. Indeed, it doesn’t help when the national tourism office gets a 20% budget cut in 2013, after seeing cuts in the previous two years.

Back in 2010, just in time for the Winter Olympics held in Vancouver and Whistler, the CTC had an operating budget of close to $100 million. In 2013, this budget is now down to $58 million! Take a look at the chart below for more details on how our national budgets can sustain comparisons.

NOTE: BrandUSA, which started promoting the USA at the national level earlier in 2012, is not included in here but has an estimated $200 million marketing budget

Too much or lack of focus?

There are some who criticize how the CTC actually spends its money, for example pulling out of the US market for consumer advertising, as it did back in 2011, to focus on emerging markets where returns are more difficult to evaluate.

One thing’s for sure: marketing to these markets is NOT an option, and efforts need to be looked up as a long-term decision to invest in key markets. I recall going to trade shows in Brazil back in 1999-2001, and things were starting to pick up.

Then, a decision was made by the CTC to pull out in 2003. Returning and hoping to gain the travel trade’s confidence is a much more difficult thing to do, specially when travel agents, tour operators and other decision-makers have moved on to more successful programs in Turkey, Bali, Central America or even perhaps increasing their presence in the USA.

Canada has lost some of its “cool” factor, but remains a competitive destination on the international scene. However we must take action in order to turn the tide around and gets some pizzazz going, perhaps in time for 2017, when we’ll be celebrating our 150th anniversary as a country?

« Frederic was an excellent speaker and was able to provide our delegates with useful information about how to manage TripAdvisor and working with OTAs. »
Kieu MacLellan
Industry Partnerships & Marketing, Nova Scotia Tourism Association
« Frederic was the Co-Chair of EyeforTravel’s Online Marketing Strategies for Travel Summit in Miami. His knowledge and passion for the travel industry made him an obvious choice. After going the extra mile to deliver a breakout session of his own, Frederic more than exceeded our expectations. »
Brian Smith
Global Events Director
Eye for travel
« Rarely have I worked with someone with such an unwavering work ethic. Frederic is curious and always looking for newer, better ways of doing things. It would be hard to find someone with more passion for the travel & tourism industry. Frederic has seen if from pretty much every angle. »
Jean-Sebastien Monty
President & Partner
U92
« Frederic spoke at our RSAA Summit in Feb. 2013 and did an excellent job. His presentation was outstanding and our members learned a lot from him. I recommend him highly. »
Matt Grayson
Executive Director, Receptive Services Association of America
RSA of America
« Frederic is a very result oriented individual. His drive to succeed sets him apart. He will always go the extra mile and his proactive approach gives him the edge everyone is looking for. Frederic is always well informed on current events and sees the impacts on the business, which are afterwards translated into a detailed actionable plan. »
Marc-Andre Nobert
Business Manager
Fido