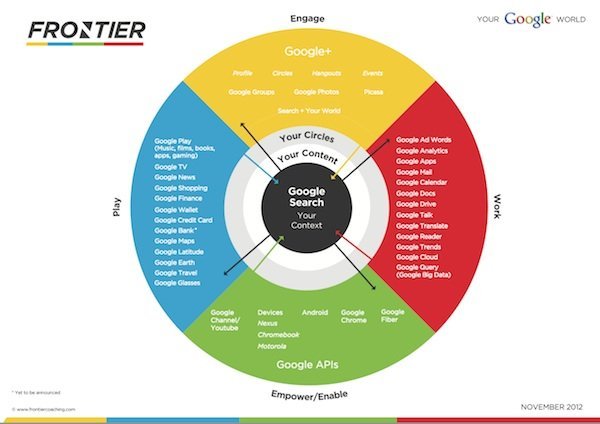 Ever since Google was founded 15 years ago in 1998, the search company has grown and evolved into what it is today: a force to be reckoned with, an omnipresence that spans across online to mobile operating services. The folks at Frontier created an infographic showing the Google infrastructure today: did you know all these services and APIs existed? How many are you presently using?

Notice how Google+ is actually NOT listed as a stand-alone silo but rather stems from the heart of Google Search, the content you share (presumably through your blog, public social platforms and Google+) and the people you share it with, i.e. Your Circles. This says a lot, in particular to those nay-sayers of Google+ as “just another social media”.

TRAVEL IS MUCH MORE THAN GOOGLE TRAVEL

Now, if you look closely at this diagram, it would seem that travel is but a line in the overall Google equation. That ain’t necessarily so. Ever since 2010, when Google acquired ITA Software, a dominant online travel agency, many people in the travel industry have been waiting to see when and how Google would be making its big move into this sphere.

Truth is, Google has been moving slowly but surely towards online travel domination ever since that time. For example:

These are just a few of the key elements that define the Google travel ecosystem as explained by the folks at Travopia: 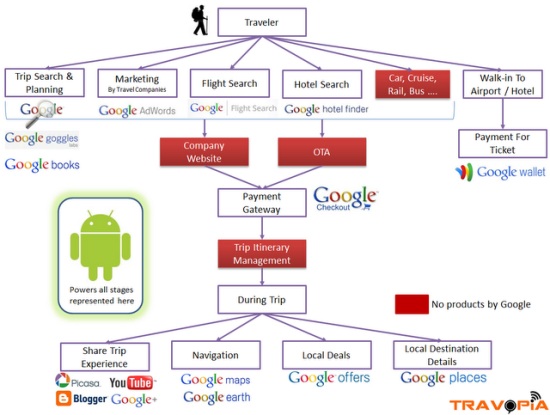 In the above diagram, we can see where Google does not yet have a foothold, but as the speed things are evolving, I am not even sure this will still be accurate in 2013.

And it says nothing about how more and more people are getting savvy about online travel search and its influence in the travel purchase funnel. For more on this, read How Travelers Use Online Sources for Travel-Decision Making.

GOOGLE NOW AND THE POWER OF MOBILE

Yet, it is perhaps through its mobile application that Google will disrupt travel marketing in its biggest way, bringing in the ever-important notion of ‘real time’. One of the most underrated novelty of 2012 was Google Now, a mobile personal assistant that some compare to Apple’s Siri.

Among other things, Google Now addresses the “trip management” box in the above diagram by assisting with schedules, traffic itineraries and estimated times, and much more. It therefore encompasses your trip details, just like an application like Tripit would do, but with all the Google information related to maps, nearby restaurants, reviews or schedules it can tap into from its Google Earth, Google Maps, Zagat or Frommers content.

In fact, out of the 21 cards displayed by the application, there are eight that are directly related to the travel sphere. Namely:

Shows your flight schedules, gate changes, traffic itinerary and information to or from the airport

Displays directions to your hotel upon arrival to your destination

Provides information and details about an event, sends reminders if you purchased tickets

Displays next bus / train when you are at a bus / train station, gives estimated times of arrivals and details of itinerary

Suggests nearby places of interest, bars and restaurants, based on your location

Displays nearby attractions to visit [pulled from Zagat]

Displays nearby photo spots with estimated time to get there

What’s next for Google in the travel vertical? With such an online domination, the one question that begs to be answered is probably: what if Google went into e-commerce? Or said differently: what if Google became transactional, as a full-fledged online travel agency? How disruptive would THAT be?

Not sure the regulators would allow this to begin with, but travel industry players need to take notice. Are you making the most of your presence online and via Google tools? Have you claimed your Place on Google? Are you monitoring reviews? Do you have a Google+ Brand Page? Do you have a Youtube dedicated channel or videos uploaded on the platform? How is your property or destination portrayed on Google Now?

I’d be interested to hear your feedback on this, so feel free to leave your comments in the section below.

« Frederic spoke at our RSAA Summit in Feb. 2013 and did an excellent job. His presentation was outstanding and our members learned a lot from him. I recommend him highly. »
Matt Grayson
Executive Director, Receptive Services Association of America
RSA of America
« Frederic was the Co-Chair of EyeforTravel’s Online Marketing Strategies for Travel Summit in Miami. His knowledge and passion for the travel industry made him an obvious choice. After going the extra mile to deliver a breakout session of his own, Frederic more than exceeded our expectations. »
Brian Smith
Global Events Director
Eye for travel
« Frederic is a very result oriented individual. His drive to succeed sets him apart. He will always go the extra mile and his proactive approach gives him the edge everyone is looking for. Frederic is always well informed on current events and sees the impacts on the business, which are afterwards translated into a detailed actionable plan. »
Marc-Andre Nobert
Business Manager
Fido
« Rarely have I worked with someone with such an unwavering work ethic. Frederic is curious and always looking for newer, better ways of doing things. It would be hard to find someone with more passion for the travel & tourism industry. Frederic has seen if from pretty much every angle. »
Jean-Sebastien Monty
President & Partner
U92
« Frederic was an excellent speaker and was able to provide our delegates with useful information about how to manage TripAdvisor and working with OTAs. »
Kieu MacLellan
Industry Partnerships & Marketing, Nova Scotia Tourism Association