Within both the international and domestic travel industries, airlines and airports play a pivotal role. International Air Transport Association (IATA) predicts that airlines will carry some 3.6 billion passengers in 2016 – an increase of around 800 million over 2011 passenger numbers!

Between 2012 and 2016, annual passenger numbers are expected to increase 5.3% per annum, with nearly 500 million new passengers traveling on domestic routes and 331 million new passengers on international routes. Yet with increasing mobile device adoption, new technologies and social media disrupting the customer experience at various levels in the travel marketing world, how is our overall flying experience changing?

A recent report produced by SITA sheds interesting light on this perspective.

It’s interesting to note that while smartphone adoption is quite high in the US population in general, sitting at 52% of all mobile users, penetration among air travelers went from 28% in 2010 to 70% in 2012, making the device a must-have travel accessory.

In similar fashion with social media 62% of passengers surveyed were active on social media, a higher penetration than in the general population.

Yet, according to this same recent survey, only 3% of all air travelers have booked through smartphone apps, kiosks or social media in 2012, but it’s expected this number will increase to at least 12% by 2015 – some industry experts say this figure could be as high as 50% by 2017!

One thing is for sure: transactions will remain online, as over three quarter of them did last year, either directly or via online travel agents. Both airlines and airports are increasingly seeking to increase revenue, direct and ancillary, through mobile and other digital networks.

The fast rate of adoption for mobile devices among air travelers is also opening up a vast array of more personalized offers, with context-relevant services that will increase the overall experience pre-, during and post-flight.

Self-service is coming of age 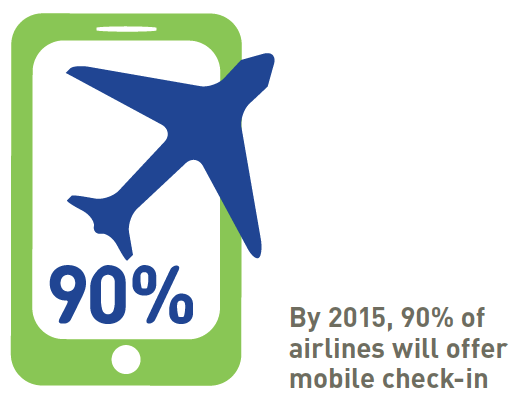 Do you remember the very first time you used a self-service kiosk at an airport to check-in for a flight and/or to register baggage? What is common place today was not always so, and the next step in this evolution will be to go even more paperless and frictionless.

For example, it will be interesting to see how quickly airports and airlines will embrace NFC technology – near field communication – allowing a customer’s mobile device to interact with the airline provider, exchanging key transactional data along while accelerating the boarding process along the way.

Many airlines now allow for boarding simply by showing a mobile device with QR code. The next three years should see substantial developments on this front in both airports and airlines processes.

The focus for self-service in the industry will be put mostly on baggage and self-boarding. According to the 2012 Baggage Report, over 99% of bags were delivered on time to passengers in 2011 and the total number of mishandled bags decreased some 20% globally.

Self-boarding might prove to be trickier, in particular with lingering memories of terrorist attacks, but various initiatives are showing it can be done. Abu Dhabi International Airport Terminal 3 has been conducting such experiments, with various safety compliance measures that ensure utmost safety and ease of process throughout.

Customer services will be both mobile AND social 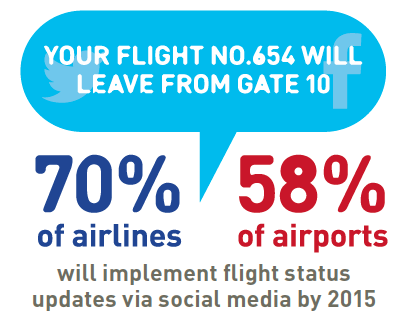 According to the IT Trends Surveys, the smartphone will be the most dominant channel of the future among airlines, with 91% saying it will be a major channel for customer service communications and only 60% saying it will be websites. Interestingly, airports also believe in the dominance of mobile and web, although slightly less at 71%.

Smartphone apps are now being developed or are in their second or third generation for major airlines, working as customer retention tool linked with reward programs and other relationship tools.

As for social media, both airlines and airports don’t consider it as significant in the overall customer experience, with 31% and 13% respectively. But it remains nevertheless a meaningful customer service platform: according to the Passenger Self-Service Survey, 62% said they are active on social media. Engagement is even higher among future generations of flyers, with 80% of 18-24-yrs on social media.

Beyond checking-in and getting flight status, social media can play a much bigger role in the overall customer experience, as various airlines have demonstrated so far, from KLM’s “meet and seat” initiative to previous examples such as “Fly2Miami” and “Surprise” (to see the videos for these two examples, click here)

Business intelligence is a must 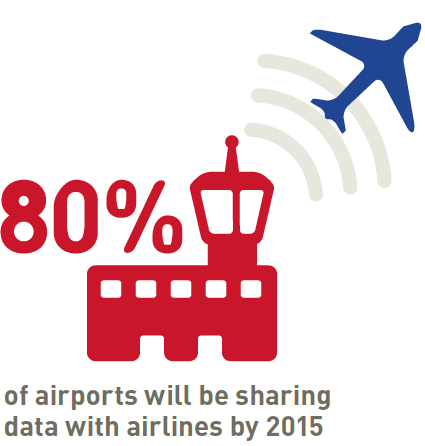 With the amounts of data circulating through mobile apps, kiosks, social media and in-house systems for both airlines and airports, the challenge of tapping into Big Data and transforming it into smart data is very real.

Business intelligence stems from getting the right information, at the right time, to the right person in order to deliver a better customer experience while businesses make a profit along the way. Everybody wins.

But in order to get to this holy grail of information sharing, there are hurdles. The technology is certainly one important aspect, as systems vary between various key players, and so will the quality of the data to be shared.

Another important hurdle, harder to tackle, refers to the willingness to share information and proprietary data with a third party. Thus, it becomes a cultural challenge as well. It is with this goal in mind that the Airports Council International (ACI) founded the ACI Aviation Community Recommended Information Services (ACRIS) initiative in 2010 to develop a harmonized framework of recommended information services to facilitate the sharing of information among aviation community stakeholders.

Last but not least will be the concern that you and I, as passengers and paying customers, may have about sharing personal data. To what extent and up until where can the information be given remains a line to define, in particular with recent stories such as WikiLeeks or PRISM that can make many people reconsider what information they are willing to share, and to whom.

Nevertheless, our flying experience certainly isn’t the same as it was just a few year ago. And it obviously won’t be the same by 2015!

« Rarely have I worked with someone with such an unwavering work ethic. Frederic is curious and always looking for newer, better ways of doing things. It would be hard to find someone with more passion for the travel & tourism industry. Frederic has seen if from pretty much every angle. »
Jean-Sebastien Monty
President & Partner
U92
« Frederic spoke at our RSAA Summit in Feb. 2013 and did an excellent job. His presentation was outstanding and our members learned a lot from him. I recommend him highly. »
Matt Grayson
Executive Director, Receptive Services Association of America
RSA of America
« Frederic is a very result oriented individual. His drive to succeed sets him apart. He will always go the extra mile and his proactive approach gives him the edge everyone is looking for. Frederic is always well informed on current events and sees the impacts on the business, which are afterwards translated into a detailed actionable plan. »
Marc-Andre Nobert
Business Manager
Fido
« Frederic was the Co-Chair of EyeforTravel’s Online Marketing Strategies for Travel Summit in Miami. His knowledge and passion for the travel industry made him an obvious choice. After going the extra mile to deliver a breakout session of his own, Frederic more than exceeded our expectations. »
Brian Smith
Global Events Director
Eye for travel
« Frederic was an excellent speaker and was able to provide our delegates with useful information about how to manage TripAdvisor and working with OTAs. »
Kieu MacLellan
Industry Partnerships & Marketing, Nova Scotia Tourism Association