Social media has changed how people and brands communicate with each other, creating expectations and new speed levels of interaction. A recent report by Sprout Social sheds some interesting light on how customer care and engagement have become intertwined in this new social reality brands must embrace.

Facebook is still the social king, yet it’s interesting to note how Twitter has been continuing its growth. In the past year alone, Facebook grew its user base by 7% while Twitter grew by 44%, for a combined growth of over 20%!

And while it’s interesting to note this combined network growth, what’s even more telling is the evolution of brand-to-consumer activity within these networks.

In fact, the Index shows a 175% increase in messages sent to brands on Twitter and Facebook requiring a response or attention. This user engagement growth is nine times that of Facebook and Twitter networks combined!

The report continues with industry comparisons in terms of brand engagement and responsiveness, as well as how consumers behave on various social channels.

Where it becomes truly fascinating is when looking at how various industries vary in their response times and rates. Fascinating and shocking, really.

Taking a look at Travel & Hospitality for example, one might argue that 11.6 hours on average is a satisfying response time. The folks at KLM airlines would beg to differ, specially since they’ve implemented a response timer directly on their Twitter account. 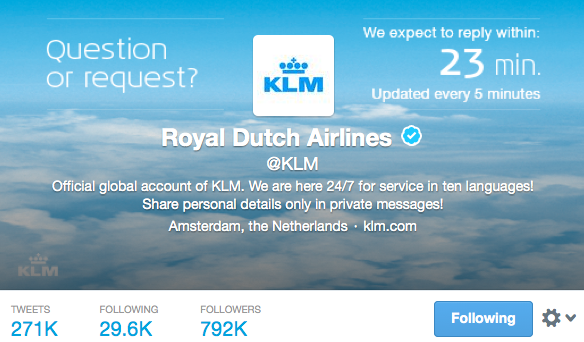 Or one might recall the stat taken from Social Habit study in the Fall of 2012 whereby 42% of social media users expect an answer within an hour!

But the real kicker can be found in the results of the right column, showcasing response rates, which average 17.6% across all industries (or 19% if looking specifically at Travel & Hospitality).

Let’s look at this differently: that’s like saying 4 out of every 5 message, comment or question made to brands are left unanswered. Would this be accepted with any other channel, like phone or email?

Check out the full infographic below or download the report by clicking here.

« Frederic was the Co-Chair of EyeforTravel’s Online Marketing Strategies for Travel Summit in Miami. His knowledge and passion for the travel industry made him an obvious choice. After going the extra mile to deliver a breakout session of his own, Frederic more than exceeded our expectations. »
Brian Smith
Global Events Director
Eye for travel
« Frederic spoke at our RSAA Summit in Feb. 2013 and did an excellent job. His presentation was outstanding and our members learned a lot from him. I recommend him highly. »
Matt Grayson
Executive Director, Receptive Services Association of America
RSA of America
« Frederic was an excellent speaker and was able to provide our delegates with useful information about how to manage TripAdvisor and working with OTAs. »
Kieu MacLellan
Industry Partnerships & Marketing, Nova Scotia Tourism Association
« Rarely have I worked with someone with such an unwavering work ethic. Frederic is curious and always looking for newer, better ways of doing things. It would be hard to find someone with more passion for the travel & tourism industry. Frederic has seen if from pretty much every angle. »
Jean-Sebastien Monty
President & Partner
U92
« Frederic is a very result oriented individual. His drive to succeed sets him apart. He will always go the extra mile and his proactive approach gives him the edge everyone is looking for. Frederic is always well informed on current events and sees the impacts on the business, which are afterwards translated into a detailed actionable plan. »
Marc-Andre Nobert
Business Manager
Fido