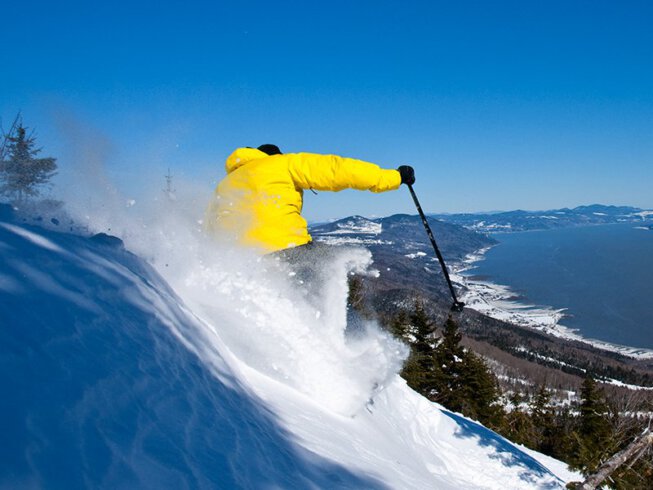 “Innovation distinguishes between a leader and a follower” – Steve Jobs

Before launching my own consulting and speaking career a year ago, I was fortunate enough to spend three years at the helm of marketing, sales and communications for a great touristic project in the province of Quebec, called Le Massif de Charlevoix.

My boss was Daniel Gauthier, former president and co-founder of world-renowned Cirque du Soleil, who sold his 50% share of this highly profitable entertainment powerhouse back in 2001. Instead of retiring to some remote island and live the filthy-rich lifestyle of the rich and famous, Daniel stayed true to his heart and passions – he’s an avid and lifelong skier -, returning home to purchase an ailing ski hill that held huge potential, assuming anyone would invest and manage its development with a long-term vision.

Thus was born the Massif de Charlevoix project, which now incorporates on-hill accommodations, a touring train between Quebec City and La Malbaie in the Charlevoix area, as well as planned year-round activities on the mountain.

HAVING A VISION AND STICKING TO IT

Between the day Daniel purchased the mountain in 2002 and the opening of its flagship hotel in Baie-Saint-Paul in the Fall of 2012, it’s been 10 long years in the making, with few highs, and many lows. Through thick and thin, he held on to his vision, despite of numerous challenges and pitfalls that would have deterred many others.

“I cannot help fearing that men may reach a point where they look on every new theory as a danger, every innovation as a toilsome trouble, every social advance as a first step toward revolution, and that they may absolutely refuse to move at all” – Alexis de Tocqueville

Having lived through the early days of the Cirque du Soleil, back in the mid-80s, Daniel knew that when you want to innovate, you will stir trouble. Cirque du Soleil wanted to reinvent the traditional circus and put on a real show, taking away the animals, inserting live music and a rich soundtrack, starting interactions with the crowd prior to entering the circus tent, etc.

In a same fashion, he would often say to me: how can we reinvent the way people think of travel & hospitality? Is there a different way to do things?

INNOVATION IS NOT AN OPTION

The reason why I tell you this story today is because I sense an increasing amount of resistance when I blog, consult or speak on the topic of social media marketing and how businesses need to embrace this change, if they have not already. New technologies are enabling possibilities and processes we could not dream of 20, 10 or even 5 years ago. Some examples?

We could go on and on with various examples here, but you get the picture. So why is it, then, that organizations still refuse access to Facebook from the company desktop, knowing full-well that employees have their own smartphone from which they can access it, as 60% of its 1.1 billion users presently do? Or worse, it is estimated that 50% of small and medium-size companies in the province of Quebec do not have a web site yet. In 2013!

For many, it’s a question of resources but when you dig a little closer, the truth often comes down to fear. Fear of the unknown, fear of transitioning to new ways of doing things, fear of entering the social media sphere, not knowing what we’ll talk about or how we’ll manage all these accounts…

In this fast-evolving context, innovation is therefore not an option, but rather an obligation. Status quo means falling behind not just your competitors but, more importantly, customers’ expectations, needs and wants.

I don’t believe there is one clear, cookie-cutter approach or silver bullet solution to spark innovation. Experience, however, has taught me these four important ingredients to bear in mind in order to innovate and succeed at it:

1. Think outside the box

We often hear this one, but what does it really mean? Thinking outside the box begins by refusing the status quo, and seeking to do things differently. Anytime I hear “we’ve already tried that”, “it’s how everyone else does it” or “that will never work”, I cringe. Sure, Einstein once said that doing same things repeatedly expecting different results was a sign of folly.

Thus, thinking outside the box usually means going beyond your sphere of activity, seeking inspiration in different countries, or different industries. And often enough, it means creating a new space where you business will thrive, also known as navigating the unchartered waters of the blue ocean.

In a recent keynote session I attended, speaker Larry Benet said it best: “People don’t care how much you know until you show them how much you care”. Or as author Simon Sinek puts it: “People don’t buy WHAT you do, they buy WHY you do it“. Whether it’s a multinational organization, a popular brand or a personal brand, customers will connect with your brand through its various channels: on premises, call centre, web, social media, mobile, etc.

Having a clear vision is one thing, communicating it and having employees live and breathe it is another. Brands that succeed are those where employees share and live the promise on an everyday basis. Some examples? Zappos, Apple or Southwest airlines, to name only these ones.

When I was at Le Massif, that vision and its mission statement were incorporated into the recruiting process to ensure hired staff aligned with common values of ecofriendly development, respect and love of the great outdoors. The vision was therefore built-in the DNA and corporate culture, so to speak.

3. Put money where your mouth is

“You’ve got to spend some money to make some money”. This truism remains one that too many still question, or delay until they get THE big idea, or revolutionary concept, before they can invest in it. If you believe in an idea or innovation, do whatever is possible to get appropriate funding.

Back in 1985, when Cirque du Soleil was only a year old, they bet the farm on their US tour, going to Los Angeles. They had enough money for the one-way trip only: it was either success at the end of the road, or everyone’s going home God knows how and there’s no more CDS. We all know what happened since.

If the brand promise is to be the best hotel experience or most awesome music festival around, the core product must deliver upon the promise yet often enough, the difference will come from the little details. And as we all know, the devil is in those details, which is where a brand can truly make a difference, whether through operational excellence or added value. But if you try to nickel & dime customers, you are short-changing them into a downward customer-experience spiral.

4. Failure is an option. Fear is not.

Last but not least, I often hear people not joining the social media realm because of fear: not enough time, not enough resources, not knowing where to begin, not knowing if we can sustain efforts, etc. The Red Cross and The US Army were among the first to get active on various social networks, and today can boast tremendous experience from the past 5-6 years.

Did they fail along the way? Of course, but every failure, small or big, were that many opportunities to learn from, tweak their approach and improve processes and overall efficiency.

“Nothing is more dangerous than a dogmatic worldview – nothing more constraining, more blinding to innovation, more destructive of openness to novelty” – Stephen Jay Gould

As Thomas Edison once famously said: “I have not failed. I’ve just found 10,000 ways that won’t work.” If you want to innovate, you must accept failure as a distinct possibility and embrace it. It’s much easier to sit back, observe and criticize than to get up and make a difference, even if it means trying a few times until reaching success. Don’t you think?

« Frederic is a very result oriented individual. His drive to succeed sets him apart. He will always go the extra mile and his proactive approach gives him the edge everyone is looking for. Frederic is always well informed on current events and sees the impacts on the business, which are afterwards translated into a detailed actionable plan. »
Marc-Andre Nobert
Business Manager
Fido
« Frederic was the Co-Chair of EyeforTravel’s Online Marketing Strategies for Travel Summit in Miami. His knowledge and passion for the travel industry made him an obvious choice. After going the extra mile to deliver a breakout session of his own, Frederic more than exceeded our expectations. »
Brian Smith
Global Events Director
Eye for travel
« Frederic was an excellent speaker and was able to provide our delegates with useful information about how to manage TripAdvisor and working with OTAs. »
Kieu MacLellan
Industry Partnerships & Marketing, Nova Scotia Tourism Association
« Rarely have I worked with someone with such an unwavering work ethic. Frederic is curious and always looking for newer, better ways of doing things. It would be hard to find someone with more passion for the travel & tourism industry. Frederic has seen if from pretty much every angle. »
Jean-Sebastien Monty
President & Partner
U92
« Frederic spoke at our RSAA Summit in Feb. 2013 and did an excellent job. His presentation was outstanding and our members learned a lot from him. I recommend him highly. »
Matt Grayson
Executive Director, Receptive Services Association of America
RSA of America