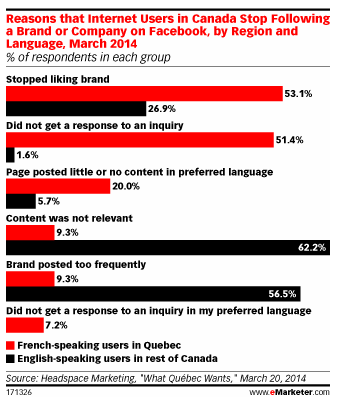 In Canada and in North America, the province of Quebec remains a mystery to many, mostly because of its French-speaking nature. With a population of more than 8 million people, of which more than 6 million speak French-only at home, Quebecers make up a fourth of the Canadian population and pack a similar punch on the economic front.

While the language is the prominent differentiating factor, Quebecers boast a different culture as well, watching locally-produced TV shows, not to mention a thriving music scene, oscar-winning movie-making, and award-winning restaurants and products of the terroir. Ice-cider anyone?

This different mindset is also reflected in how French-speaking Quebecers use the web and social media to follow brands or companies online. A recent report by emarketer, called “Focus on French Canada: Using Digital Channels for Marketing in Quebec” highlights some of these differences with English-speaking users in the rest of Canada.

For travel destinations wishing to woo Quebecers to spend their vacation dollars with them, it’s therefore not so much a matter of posting too much or being irrelevant but rather ensuring brands respond to inquiries on social networks. And perhaps it’s because of our latin blood, and we tend to get emotional about it all, but we’ll often stop following a brand or company on Facebook simply because we stopped liking it. It’s like a relationship thing, really!

Bearing this in mind, and knowing how travel marketing goes a long way in fostering an emotional connection between readers and a blogger’s experiences at a given destination, here are travel bloggers you probably haven’t heard of, unless you live in Quebec (or France, in some cases). These folks have niche audiences and/or cover travel with a certain angle, and they do it well. And more importantly, they do it in French, to a captive and savvy traveling audience. Travel destinations take note!

In no particular order, here they are:

Marie-Julie is without a doubt the foremost travel blogger in the province of Quebec, with her blog Taxi-Brousse followed by readers in Quebec and equally, if not more, in France and many French-speaking countries around the world.

She is a regular contributor on popular TV morning shows like “Salut Bonjour” and weekend radio shows, sharing travel adventures and advice for the general public: solo travel, families, couples, etc. She freelances for various media outlets, and held the official travel blog for MSN.ca untils 2013 (MSN discontinued all of its blogs last year). She is a regular on the travel & media show circuits, i.e. Pow Wow, Rendez-Vous Canada, Go Media, etc.

Jennifer is the founding editor of the collective Moi, mes souliers, a portal dedicated to globe-trotting, often mentioned or referred to by newspapers, i.e. La Presse. It covers travel in all of its aspect, from pre-departure to practical tips during travel and how to combat the post-return blues.

All continents and all types of travel are also covered by the site, from solo travel to backpacking or families, there are loads of quality posts on how to achieve great trips on a shoestring. Jennifer is an active members of various travel blogging groups on Facebook, both in French and English.

Ok, so I lied: this blog is in English but I really wanted to include Marie-Eve on this list because, well, she so represents what Montreal is all about! Her blog, aptly called A Montrealer living abroad, is about a Montreal girl who can’t sit still, travels the world and lives in Europe as an expat. Complicated? No, but if you like awesome Instagram storytelling, Marie-Eve is at the top of her game.

She was part of the newly formed Instagram brigade during the popular Francofolies festival this past June in Montreal, and she is a regular contributor to AFAR magazine, among many others.

Beatrice hasn’t been in the travel blogging business perhaps as long as others on this list, but she carved an interesting niche by catering specifically to women, with a small budget concern. Thus the name for he blog Eille la cheap! (loosely translated: Hey, you cheap one!).

She’s one of the rare ones, if not the only one, to have her blog available in both languages, although there is a clearer focus, breadth and depth of content on the French side of her site. She also now features different regular contributors on her site, for more frequent and quality content.

Not many men on this list, I will give you that, but Gary is a heavy-hitter on the Quebec travel blogging scene. Well in fact, he is a journalist and writes regular travel stories for the magazine L’Actualité (sister publication of Maclean’s, a well-known weekly Canadian magazine) as well as for Le Devoir, an independent daily newspaper.

So truth is, he doesn’t have his own travel blog per se, but he reaches a wide audience through these classic media outlets where is signature is well recognized in Quebec.

Gotta love Marie-Eve Blanchard’s travel blog style, it’s very… poetic! Called Como la espuma, it refers to a quote from the movie Y tu mama tambien, and the backbone to the blog is basically to live every day as if it was the last one.

This travel blog may seem eclectic at first, but there is a recurrent theme, with the sea as a common thread, and various destinations described under a different light. Marie-Eve excels not only with words, but also with images (Instagram), tweets and thoughtful posts on Facebook.

Michel is a professionnal photographer with more than 25 years of experience working with destinations, hotels, attractions and various actors in the tourism industry in Quebec and outside his native province. His travel blog Coups de coeur pour le monde came about a few years ago, combining his many travels (for work) with the thought of sharing his experiences with clients and readers.

The blog content is made up of articles by Michel and his significant other, Jasmine Nadeau, and gives out practical tips through short posts with an ongoing keen eye on photos and videos.

Sarah is the resident blogger for the travel section on Canoe.ca, a web portal very popular in Quebec, belonging to the Videotron brand, a subsidiary of Quebecor Media, which owns a variety of TV, newspapers and magazines in Quebec and in Ontario (Toronto Sun).

The travel blog, called Bouts du Monde, reaches a wide audience, yet it maintains a quirky tone, with accessible information and how-to handy tips, with the ever popular lists and “top 20 things to do in…” articles. Always an inspiring read!

Nathalie’s travel blog has a great tagline, difficult to translate without losing some of the meaning: Globe raconteuse. Instead of being just a globe-trotter, you may say she’s a globe-storyteller, roaming across the world seeking good food, good times, and everything in between!

Her audience seems to be skewed mostly towards female, as she shares articles on topics such top destinations where to dance, or find the best-looking men (a two-part series, imagine that!). She is also a sought-after freelancer for mainstream magazines such as Coup de Pouce, Le Bel Âge (senior citizens), Elle Quebec, VIA Destinations and various others.

Anick-Marie has her own niche as woman nomad, solo traveler and hitchhiker! Thus, the name for her blog, Globestoppeuse. Traveling since 2002, Anick is well versed in the travel sphere.

She has been contributing for years with Couchsurfing, helping with their translation needs, and has been also collaborating to the collective Moi, mes souliers (see above, with Jennifer Doré Dallas). She is a published author with Lonely Planet, her book “La Bible du Grand Voyageur” being also available in Spanish.

There are not many blogs dedicated to responsible travel, so I thought it would be timely to include Sylvie and Anne-Marie on this list. Together, they publish regularly on Blogue du Tourisme Responsable, hosted on the website of acclaimed travel guides Ulysse for more than five years now.

Posts are aligned with destinations covered by Ulysse travel guides, but cover a wide range of events and attractions, with a concern to share best practices. Anne-Marie freelances with a variety of media outlets, while Sylvie also consults with clients on implementing sustainable tourism solutions.

Louise has been traveling for more than 15 years, and she publishes regularly on her travel webzine, Planet Monde. History, litterature, arts, gastronomy and popular traditions are among the guiding principles for her diverse travels across the globe. She also contributes to established media outlets such as Tourisme Plus, Le Devoir, Le Bel Âge or Camping Caravaning, among others.

The above mentioned travel bloggers, journalists and photographers are household names in Quebec, but there are obviously many up and coming bloggers rising to the scene. I certainly won’t pretend to knowing all the travel bloggers, instagramers, up and coming or established, but I wanted to point out two more bloggers worthy of the shout out.

Caroline Decoste is a Quebec City-based foodie blogger, with a tongue-and-cheek writing style. Her blog? Je suis snob! (translated: I am a snob!). Rants, recipes and raves are on the menu!

As for Julie Aubé, she has her own blog focusing on the pleasures of cooking, eating well, and traveling with these elements in mind! She is presently the resident blogger for Terroir et Saveurs, Quebec’s association promoting agrotourism, local products and regional cuisine. I predict we’ll be hearing more of her very soon! 🙂

Do you work with travel bloggers and if so, how was your experience? If you are a travel brand interested in promoting itself in Quebec, have any questions or comments, do let me know in the comment section below.

« Frederic spoke at our RSAA Summit in Feb. 2013 and did an excellent job. His presentation was outstanding and our members learned a lot from him. I recommend him highly. »
Matt Grayson
Executive Director, Receptive Services Association of America
RSA of America
« Rarely have I worked with someone with such an unwavering work ethic. Frederic is curious and always looking for newer, better ways of doing things. It would be hard to find someone with more passion for the travel & tourism industry. Frederic has seen if from pretty much every angle. »
Jean-Sebastien Monty
President & Partner
U92
« Frederic is a very result oriented individual. His drive to succeed sets him apart. He will always go the extra mile and his proactive approach gives him the edge everyone is looking for. Frederic is always well informed on current events and sees the impacts on the business, which are afterwards translated into a detailed actionable plan. »
Marc-Andre Nobert
Business Manager
Fido
« Frederic was an excellent speaker and was able to provide our delegates with useful information about how to manage TripAdvisor and working with OTAs. »
Kieu MacLellan
Industry Partnerships & Marketing, Nova Scotia Tourism Association
« Frederic was the Co-Chair of EyeforTravel’s Online Marketing Strategies for Travel Summit in Miami. His knowledge and passion for the travel industry made him an obvious choice. After going the extra mile to deliver a breakout session of his own, Frederic more than exceeded our expectations. »
Brian Smith
Global Events Director
Eye for travel