Marketers around the world know getting organic reach from a Facebook Page is no longer a walk in the park as it once was. With its EdgeRank algorithm, Facebook filters content to ensure people see only relevant posts in their newsfeed.

Why, you may ask? Considering the following stats:

With such high volume of activity and noise in users’ newsfeed, there are an estimated 1,500 interactions taking place at any given moment, which is why EdgeRank will show users only between 300-350 stories in their newsfeed, prioritizing content from closer friends, colleagues or relatives, based on recent affinity and engagement (likes, comments, shares, tags).

Brand Pages are thus seeing organic reach falling below the 6% average, with bigger Pages – more than 500k fans – reaching only 2% of their community on average with organic posts.

From Photo to Video Dominance

In this heated battle for potential travelers and consumers attention on Facebook, brands have embraced the use of photos in the past couple of years, as this kind of post tends to garner more organic reach and engagement with Page fans and community at large.

In fact, when SocialBakers analyzed 1.2 million posts made by 30,000+ Facebook Pages worldwide back in March 2014, photos represented 75% of all types of content posted. More importantly, it represented 87% of most shared posts on these Facebook Pages! Notice how videos were only a blip on the radar screen at the time… 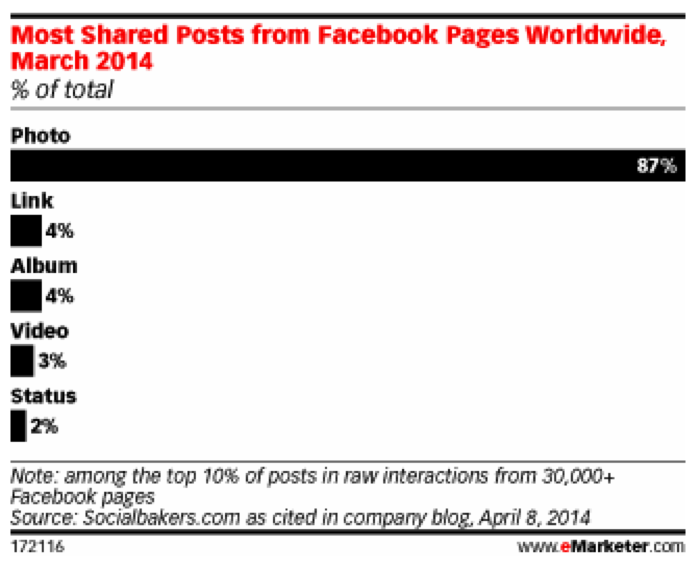 Fast forward to less than a year later, and things have changed dramatically with the up and coming newer kid on the block: video. Ever since Facebook introduced video playing with its auto-play feature in users’ newsfeed during the summer of 2014, a new revolution is taking place.

The final straw, so to speak, came from yet another study conducted by SocialBakers, this time looking at 670,000 posts made by 4,445 brand Pages on Facebook between October 2014 and February 2015.

As surprising as this may seem, photo posts have gone from hero to zero, and the king of the hill is now video, obtaining both best average organic reach and best average fan reach.

I question some aspects of the SocialBakers study, in particular the fact that “status” posts that really work tend to be those which include a picture. In other words, photos still create lots of engagement and help getting more reach for most posts, whether through a pure “photo” post, through a status or even through a link post, where the thumbnail that comes with a given article often helps stirring more comments and interactions.

Nevertheless, we get the point: videos are hot, hot, hot!

Here are five things to look out for with videos on Facebook:

1. Native videos will get more engagement

Yes, there are many videos shared on Facebook that are actually hosted on YouTube. But guess what? You can and should trying uploading videos directly on your Facebook Page to see the results. Do you think Facebook will make sure native videos see more organic reach and audience? You bet. 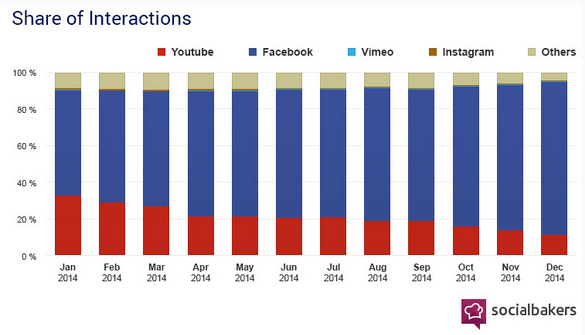 2. Make the most of featured videos

It is now possible to have a featured video, which is basically the possibility to highlight a particular video using all the width of the Page, along with a caption and call-to-action within the video, too. Expect more and more brands to take advantage of this feature, like the folks at Visit Philadelphia are doing with their Page.

Most brands seem content with displaying their videos in the video section of their Facebook Page, just like they most likely do on YouTube or wherever they publish videos. Yet, why not build a playlist according to your products or services? A destination could build a playlist of videos around seasons (Christmas, Easter, Summertime, etc.), or niche segments such as meeting & conferences, romantic getaways or perhaps festivals & events.

Facebook insights have come a long way since their inception, and marketers ought to take advantage of the intelligence we can glean from its data. This is true as well with videos posted on Facebook, as we can now access valuable information about who sees them, when, if it’s in “auto-play” mode or not, and so on.

As always with Facebook insights, you can extract reports and crunch the data outside of Facebook, rather than limit yourself with what is being shown, so check out the video analytics to help tweak and optimize your efforts with videos on Facebook. 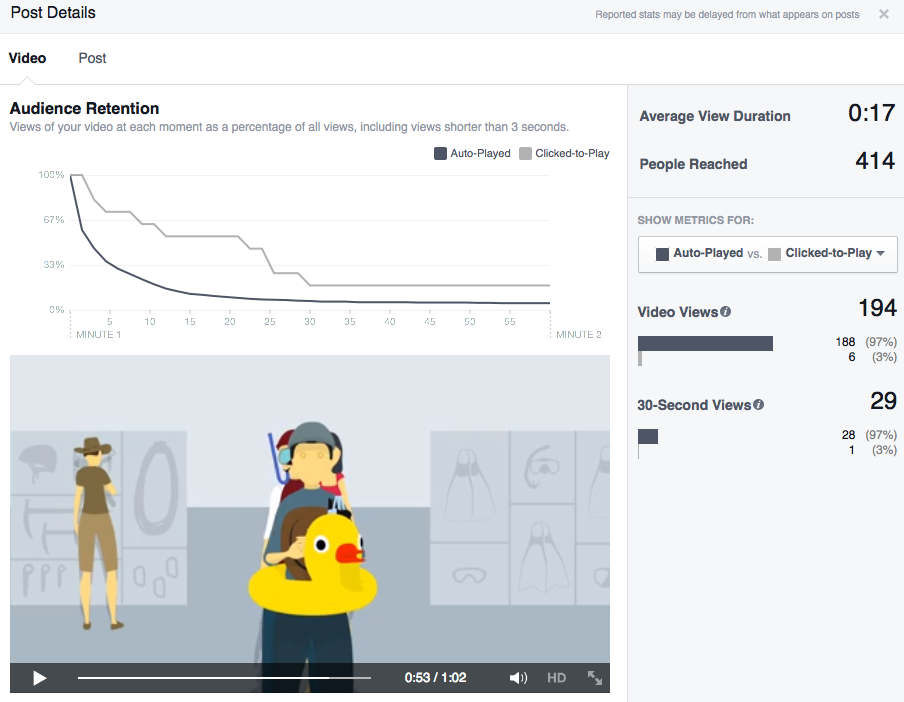 It’s been a couple of months, since the Fall of 2014, that Facebook introduced the possibility to build ad campaigns for videos. Have you tried them out yet? You can use Facebook’s native campaign manager or Power Editor to create campaigns, ad sets and creatives that will reach audiences, as defined by your needs and wants, and only limited by the budget you are willing to spend.

Your best bet is still trial and error, experimenting with small amounts to begin with and adjusting along the way. 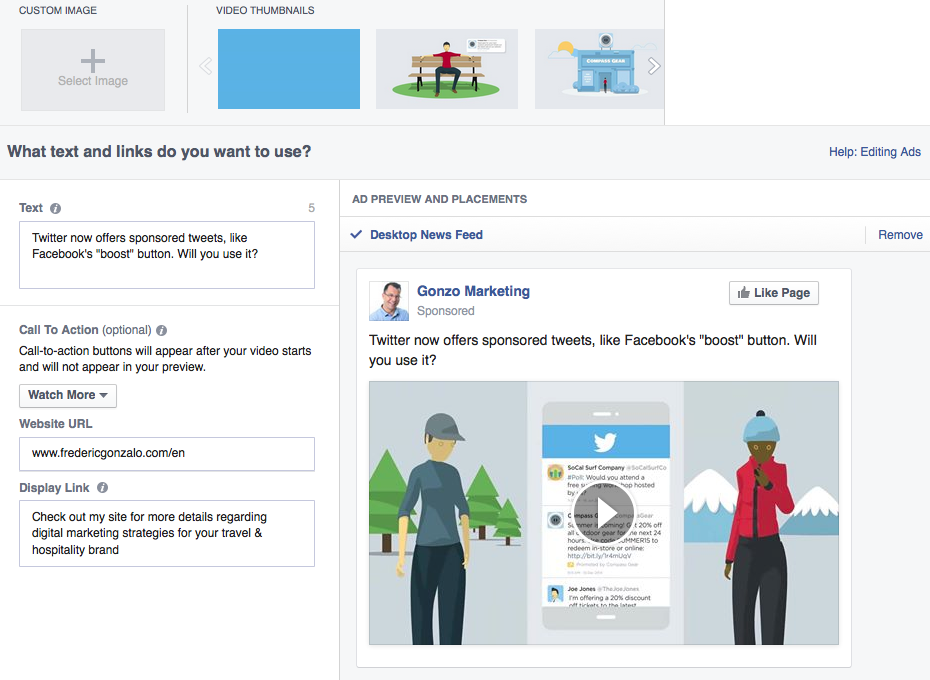 Videos are hot right now, on Facebook, but it doesn’t mean it will be that way in the long run. So be among the early adopters that embrace the opportunity, learn from mistakes and make the most of this tactic as long as it answers a business objective for your brand, which remains the first and foremost goal of any digital initiative.

« Frederic is a very result oriented individual. His drive to succeed sets him apart. He will always go the extra mile and his proactive approach gives him the edge everyone is looking for. Frederic is always well informed on current events and sees the impacts on the business, which are afterwards translated into a detailed actionable plan. »
Marc-Andre Nobert
Business Manager
Fido
« Frederic was an excellent speaker and was able to provide our delegates with useful information about how to manage TripAdvisor and working with OTAs. »
Kieu MacLellan
Industry Partnerships & Marketing, Nova Scotia Tourism Association
« Rarely have I worked with someone with such an unwavering work ethic. Frederic is curious and always looking for newer, better ways of doing things. It would be hard to find someone with more passion for the travel & tourism industry. Frederic has seen if from pretty much every angle. »
Jean-Sebastien Monty
President & Partner
U92
« Frederic was the Co-Chair of EyeforTravel’s Online Marketing Strategies for Travel Summit in Miami. His knowledge and passion for the travel industry made him an obvious choice. After going the extra mile to deliver a breakout session of his own, Frederic more than exceeded our expectations. »
Brian Smith
Global Events Director
Eye for travel
« Frederic spoke at our RSAA Summit in Feb. 2013 and did an excellent job. His presentation was outstanding and our members learned a lot from him. I recommend him highly. »
Matt Grayson
Executive Director, Receptive Services Association of America
RSA of America