Within the travel marketing ecosystem, destinations play a pivotal role at two key stages: during the planning phase, when potential travelers must be aware of your country, state, region or area, and during the travel phase, when travelers actually experience lodging, restaurants, attractions and transportation to and within your destination.

Given a new reality, where both travelers and locals alike can spread the word about a destination, we’re seeing a blurring of the lines between these phases of travel, where photos and videos shared on social network impact a brand’s reputation in real-time. I referred to this in What It Takes To Become a Digital Destination.

Today, travel brands that “get it” are active on various social networks, engaging with past, present and future travelers: hotels, airlines and airports are particularly effective at this. Destinations are no different, and many are leading the way with a savvy digital marketing approach, including a content strategy across platforms such as blogs, newsletters, dynamic websites and social media management.

But the destination brands that “really get it”, I believe, are those who can achieve getting some offline interaction stemming from an online initiative. In other words, how can we get people to talk about us, mention us in their pictures, even if they don’t follow us on Twitter or Facebook, for example? A simple answer: hashtags!

Rather than explain the theory around the utilization of hashtags in destination marketing, allow me to give you three great examples that epitomizes what I am talking about.

In any country or destination, there are a few well-known classic photo opportunities where bus tours will stop and/or even locals come for a Sunday walk or brunch. If you know there are thousands of picture being taken there, why not take advantage of this opportunity to spread the word on social networks?

This is basically what Visit Denmark is doing with its recent initiative to install physical signs at key places of interest across the country, inviting people to share via their preferred social network: Twitter, Instagram, Facebook, etc.

I like this approach as it doesn’t focus solely on a single hashtag, and can highlight various spots worthy of a nice picture (not to forget the touristic experience at the attraction or area of interest). Combined with its #visitdenmark hashtag, the destination can thus monitor closely mentions on Twitter, Instagram and elsewhere to see how far and wide the message is reaching.

The folks at Tourisme Montreal, in the French-speaking province of Quebec, in Canada, took a different angle when they launched their #MTLmoments hashtag early in 2013.

At first, it was meant to be a summer-long initiative inviting people to share their “Montreal moments” on Twitter and Instagram, along with physical frames strategically positioned in key touristic spots in the city: Old Port, Fine Arts Museum, Botanical Garden, etc. In great part because of these frames, locals embraced the campaign as well and #MTLmoments has now become mainstream, defining the spirit of the city in both good and bad times.

With its bilingual aspect – it works perfectly in French AND English – the hashtag has been used already more than 73,000 times already on Instagram alone!

This campaign is now in its second year and still going strong, yet while there are other hashtags used on ad hoc basis, for example during Montreal’s restaurant week #TasteMTL, it has enough legs to stand strong without much re-investment. This says a lot about how a simple concept – having physical oversized frames interspersed across town – can go further than any paid media campaign ever could. 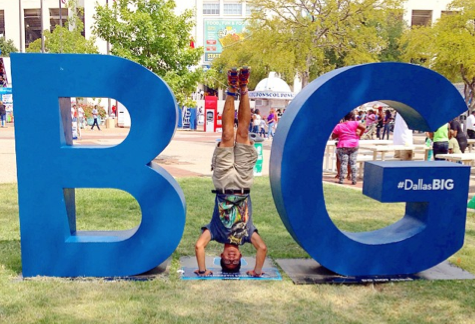 Because everything is BIG in Texas, nobody would be surprised to hear that Visit Dallas’ tagline is “Big Things Happen Here”. But rather than simply inviting travelers to share their photos with a hashtag like #DallasBIG, the folks from Visit Dallas came up with the brilliant idea to have the letters B and G placed in various key places across town.

People are then invited, visitors and locals alike, to step in and be the “I” in the word BIG, with a recall of the hashtag nearby for quick sharing on people’s preferred social network.

Beyond the 19,000 tagged pictures on Instagram, such a campaign aligns perfectly with the destination branding, which is deployed across various media outlets. Having using-generated content thus complements these efforts, stressing on the BIG benefits of what the destination has to offer. It’s also a non-expensive reminder of the city’s tagline in key locations, reinforcing its message along the way.

These three examples can tell us a lot about how to effectively manage a hashtag and making it come alive offline as well as online. Here are three tips to note:

Don’t take the hashtag for granted

Even if you promote it on your Twitter account, Instagram and Facebook, as well as your website, there are many folks out there who simply don’t know about it. In Montreal, you can see clearly the #MTLmoments hashtag on the red frames, as well as on official tourism documents such as city maps and information kiosks. Same with #DallasBIG, which is written on the oversized letter “G”.

It’s great to have these physical reminders to take a picture, but is the place photo-friendly to begin with? It needs to be a special place where we all want to have a picture taken, to share with friends and colleagues on our social networks.

This can be sometimes taken for granted, but if the setting is important, it’s even better if people will have an experience while taking the shots. It’s what I particularly like about the BIG campaign, as we can all imagine various ways to “being” that middle letter, right?

Have you seen other innovative uses for hashtag in travel marketing? Or ways to make a social initiative successful offline too? I would love to have your comments in the section below.

« Frederic is a very result oriented individual. His drive to succeed sets him apart. He will always go the extra mile and his proactive approach gives him the edge everyone is looking for. Frederic is always well informed on current events and sees the impacts on the business, which are afterwards translated into a detailed actionable plan. »
Marc-Andre Nobert
Business Manager
Fido
« Rarely have I worked with someone with such an unwavering work ethic. Frederic is curious and always looking for newer, better ways of doing things. It would be hard to find someone with more passion for the travel & tourism industry. Frederic has seen if from pretty much every angle. »
Jean-Sebastien Monty
President & Partner
U92
« Frederic was an excellent speaker and was able to provide our delegates with useful information about how to manage TripAdvisor and working with OTAs. »
Kieu MacLellan
Industry Partnerships & Marketing, Nova Scotia Tourism Association
« Frederic was the Co-Chair of EyeforTravel’s Online Marketing Strategies for Travel Summit in Miami. His knowledge and passion for the travel industry made him an obvious choice. After going the extra mile to deliver a breakout session of his own, Frederic more than exceeded our expectations. »
Brian Smith
Global Events Director
Eye for travel
« Frederic spoke at our RSAA Summit in Feb. 2013 and did an excellent job. His presentation was outstanding and our members learned a lot from him. I recommend him highly. »
Matt Grayson
Executive Director, Receptive Services Association of America
RSA of America