Facebook will become a public company this week with its IPO slated for May 16th. The company is valued somewhere between 96 and 120 billion dollars, depending on how many stocks will be made available, initial stock price based on experts and market valuation.

Well then, we can only expect Facebook to become a more serious company, with stringent control and publicly available information rather than private management bathed in secrecy, right? Perhaps. But in fact, there are many signs that actually point towards Facebook becoming less relevant in our lives, thus marking the end of an era and perhaps, the beginning of the end…

Pay to highlight your status

Whoah, I know what some of you may be thinking: are you nuts? The beginning of the end for Facebook? While I don’t believe Facebook will disappear anytime in the near future, there have been recent moves and declarations that certainly seem out of place. Enough to cast a serious doubt in my mind. The most recent is Facebook testing a new feature whereby one can pay to ensure friends will see one’s post. 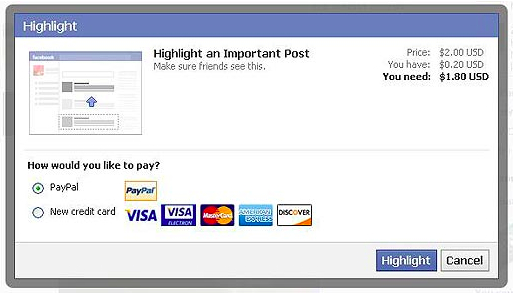 Now, the only reason a feature like this would ever come to life is simply because posts don’t get to friends anymore. In fact, Facebook estimates only 12% of your posts actually reach your friends! (And if you are a business page, don’t kid yourself either: you are doing marginally better, with 16% of posts reaching fans)

Experts are now debating the usefulness and worthiness of this feature, how it may be useful when you are announcing something important, i.e. wedding, birth, new job, etc. But did I miss something along the way, or it just seems like Facebook is just not performing like it used to in the earlier days? With the new Timeline approach, with friends segmented into random lists, with notifications on or off without us knowing about it half the time and, more importantly, with Facebook EdgeRank deciding for us what we see or not in the newsfeed, I wonder if this 12% statistic is not actually overly-optimistic!

I have 635 friends on Facebook, which means my posts reach roughly 76 out of them on a consistent basis, according to this rule of thumb. Assuming there are some folks in there that are acquaintances, ex-work colleagues or old college friends I no longer relate to, my inner circle would still be in the 300s. So in order to talk to all of them, I will now need to (or eventually need to) pay for this? I have always been fine seeing ads on pages, or even the new “featured stories” appear in the middle of my news feed, but this “pay to highlight a post” concept is beyond me. It reeks of “we need to monetize our 901 million fans quickly before the IPO”.

The other aspect that casts a serious shadow in my mind about Facebook’s long-term perspective is how it doesn’t seem to have a mobile strategy in place. According to its most recent filings part of the IPO process, Facebook admits that its mobile business is light on advertising revenues, with no clear strategy in place to remedy the situation.

Yet, according to latest report from ComScore, Americans now spend more time accessing Facebook through their mobile devices than via a desktop, spending 441 minutes per month on Facebook mobile, versus 391 minutes on Facebook’s classic website. It partly explains why Facebook threw 1 billion $ at Instagram, purchasing the mobile application sensation in photo-sharing, appealing with its 35 million users but despite no clear revenue model in place. But it doesn’t explain why Facebook’s mobile experience is still less than par…

How does Facebook monetize its success in mobile penetration? Right now, Apple and its proprietary iOS is battling it out with Google and its open Android platform, both owning the lion share of mobile devices penetration worldwide. How long until a Facebook device, if ever?

Where will growth come from next?

Finally, with Facebook holding such a strong foothold in most countries around the world, save for China, it seems like it has reached maturity and growth has slowed. Sure, there will be great buzz this summertime once the almighty mark of “1 billion fans” will be reached, but then what? In Canada, where penetration is among the highest in the world, 55% of the population is already on Facebook. In the 18-25 age group, it hovers higher than 93%, while the 55+ are still growing at a quick pace, in particular in the women demographic.

But as we all know, success is fickle and staying on top as the leader is often a more difficult process than whatever lead us there. The social media landscape is changing fast – Pinterest, anyone? and mobile has become much more than a channel: it’s a way of life, a direct link to how we interconnect with one another. Facebook is certainly making efforts to adapt and staying ahead of the curve, but making us pay to highlight posts or having a less-than satisfactory experience via our mobile are sure ways to alienate its fans base. And very soon, its shareholders.