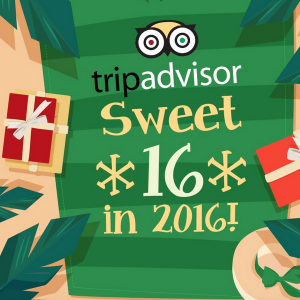 You’ve probably heard a million times the expression “How time flies”, and I can certainly attest to that seeing my three boys growing at the speed of light. It boggles the mind to think of what we used to do before the internet, social media or even mobile phones.

After all, the iPhone hasn’t even been around for a decade (it was launched in 2007), while the iPad made its first appearance only six years ago in 2010. So it’s interesting to see a site such as Tripadvisor celebrating its sweet sixteen this year, specially since it was launched at the peak of the dot.com bubble, slightly before the whole thing became a bust.

From Review Site To OTA

Back in 2000, Tripadvisor was essentially a travel review site, which remains its core benefit to this day. Yet it’s been interesting to see recent developments, as its morphs into a full-fledged online travel agency with its Instant Booking feature. These guys understand how to rock travel marketing.

As Tripadvisor turns 16 in 2016, the folks at SunSearchHolidays came up with a nifty infographic highlighting 10 lesser known facts about Tripadvisor, but also many insightful stats that show just how unavoidable the site has become in the travel decision-making ecosystem.

Here are a few key stats that stand out:

« Frederic was an excellent speaker and was able to provide our delegates with useful information about how to manage TripAdvisor and working with OTAs. »
Kieu MacLellan
Industry Partnerships & Marketing, Nova Scotia Tourism Association
« Frederic was the Co-Chair of EyeforTravel’s Online Marketing Strategies for Travel Summit in Miami. His knowledge and passion for the travel industry made him an obvious choice. After going the extra mile to deliver a breakout session of his own, Frederic more than exceeded our expectations. »
Brian Smith
Global Events Director
Eye for travel
« Rarely have I worked with someone with such an unwavering work ethic. Frederic is curious and always looking for newer, better ways of doing things. It would be hard to find someone with more passion for the travel & tourism industry. Frederic has seen if from pretty much every angle. »
Jean-Sebastien Monty
President & Partner
U92
« Frederic spoke at our RSAA Summit in Feb. 2013 and did an excellent job. His presentation was outstanding and our members learned a lot from him. I recommend him highly. »
Matt Grayson
Executive Director, Receptive Services Association of America
RSA of America
« Frederic is a very result oriented individual. His drive to succeed sets him apart. He will always go the extra mile and his proactive approach gives him the edge everyone is looking for. Frederic is always well informed on current events and sees the impacts on the business, which are afterwards translated into a detailed actionable plan. »
Marc-Andre Nobert
Business Manager
Fido