On September 27th, it’s World Tourism Day, and this year’s theme is “Tourism & Sustainable Energy: Powering Sustainable Development”. We don’t often take the time to ponder what the tourism industry means to our everyday life, yet 2012 marks the first the year where we will hit the 1 billion international visitors mark worldwide.

Having so many people travel around the globe raises issues that the World Tourism Organization (UNWTO) wishes to highlight, in particular the tourism industry’s role in a brighter energy future; a future in which the world’s entire population has access to modern, efficient and affordable energy services.

It’s also a good opportunity to think about sustainable development and revisiting why we work in this field, how we can ensure leaving something behind for future generations to enjoy, not only for leisure purposes but more importantly for the living communities that shape the different destinations around the world.

THE POWER OF TOURISM

This reminded me of a video produced by the Canadian Tourism Commission (CTC) about a year ago, highlighting what the tourism industry meant to this country’s economy from coast to coast to coast. (See below)

Side note: Funny how things change fast sometimes. In 2011, just a year after the great success of the Winter Olympics in Vancouver, Canada ranked yet again #1 on the Country Brand Index for a second time in a row and we were on a roll, it seemed. Since then, however, operating budgets for the CTC have been cut by close to 20% meaning cutbacks in various markets, including the US where the CTC had already moved out to leave provinces and cities go at it alone.

Then, earlier in 2012, Brand USA officially launched its first campaign and is already generating positive results bringing more international travelers to the USA. For more on this, read What future for Canada as a travel destination brand?

Nevertheless, tourism is a big deal in Canada, in North America and around the world. It accounts for 30% of the world’s exports of services and 6% of overall exports of goods and services. It creates employment in the service sector associated with tourism, such as transportation, hospitality and entertainment, representing one out of every twelve jobs worldwide! In fact tourism is responsible for 5% of the world’s gross domestic product (GDP), yielding more than 1,000 billion US dollars in 2011 – that’s a lot of zeros if you want to look at it that way!

According to Wikipedia, tourism is “travel for recreational, leisure or business purposes”. The UNWTO defines tourists as people “traveling to and staying in places outside their usual environment for not more than one consecutive year for leisure, business and other purposes”. Personally, I prefer the definition given by the author Paul Theroux:

Tourism can take place at the other end of the world, just like it can happen near your home, attending a local event that may equally stir emotions of unsettling discovery. But either way you experience it, tourism has a unique way to make us appreciate different cultures, different foods, different lifestyles and different architectures. As the American poet Henry David Thoreau said it best, “Only the traveling is good which reveals to me the value of home and enables me to enjoy it better”.

So, what does tourism mean to you? 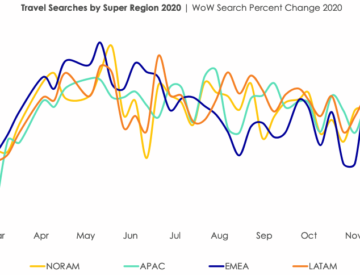 « Rarely have I worked with someone with such an unwavering work ethic. Frederic is curious and always looking for newer, better ways of doing things. It would be hard to find someone with more passion for the travel & tourism industry. Frederic has seen if from pretty much every angle. »
Jean-Sebastien Monty
President & Partner
U92
« Frederic was the Co-Chair of EyeforTravel’s Online Marketing Strategies for Travel Summit in Miami. His knowledge and passion for the travel industry made him an obvious choice. After going the extra mile to deliver a breakout session of his own, Frederic more than exceeded our expectations. »
Brian Smith
Global Events Director
Eye for travel
« Frederic was an excellent speaker and was able to provide our delegates with useful information about how to manage TripAdvisor and working with OTAs. »
Kieu MacLellan
Industry Partnerships & Marketing, Nova Scotia Tourism Association
« Frederic is a very result oriented individual. His drive to succeed sets him apart. He will always go the extra mile and his proactive approach gives him the edge everyone is looking for. Frederic is always well informed on current events and sees the impacts on the business, which are afterwards translated into a detailed actionable plan. »
Marc-Andre Nobert
Business Manager
Fido
« Frederic spoke at our RSAA Summit in Feb. 2013 and did an excellent job. His presentation was outstanding and our members learned a lot from him. I recommend him highly. »
Matt Grayson
Executive Director, Receptive Services Association of America
RSA of America